HomeHealthAnatomy and Function of the Urinary System
Health

Anatomy and Function of the Urinary System 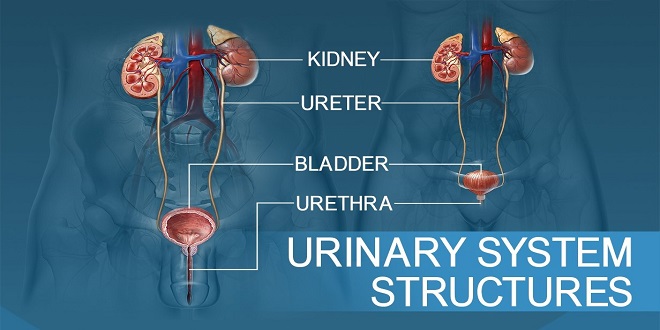 The two kidneys are located in the upper abdominal cavity on either side of the vertebral column, behind the peritoneum (retroperitoneal). The upper portions of the kidneys rest on the lower surface of the diaphragm and are enclosed and protected by the lower rib cage. Each kidney has an indentation called the holus on its medial side. At the holus, the renal artery enters the kidney, and the renal vein and ureter emerge. The renal artery is a branch of the abdominal aorta, and the renal vein returns blood to the inferior vena cava. The ureter carries urine from the kidney to the urinary bladder.

INTERNAL STRUCTURE OF THE KIDNEY

In a coronal or frontal section of the kidney, three areas can be distinguished. The lateral and middle areas are tissue layers, and the medial area at the hilus is a cavity. The outer tissue layer is called the renal cortex; it is made of renal corpuscles and convoluted tubules. These are parts of the nephron and are described in the next section. The inner tissue layer is the renal medulla, which is made of loops of Henle and collecting tubules (also parts of the nephron). The renal medulla consists of wedge-shaped pieces called renal pyramids. The tip of each pyramid is its apex or papilla.

The nephron is the structural and functional unit of the kidney. Each kidney contains approximately 1 million nephrons. It is in the nephrons, with their associated blood vessels, that urine is formed. Each nephron has two major portions: a renal corpuscle and a renal tubule. Each of these major parts has further subdivisions, which are shown with their blood vessels.

BLOOD VESSELS OF THE KIDNEY

The blood pressure in the glomeruli, compared with that in other capillaries, is relatively high, about 60 mmHg. The pressure in Bowman’s capsule is very low, and its inner, oocyte layer is very permeable, so that approximately 20% to 25% of the blood that enters glomeruli becomes renal filtrate in Bowman’s capsules. The blood cells and larger proteins are too large to be forced out of the glomeruli, so they remain in the blood.

The kidneys are the principal regulators of the internal environment of the body. The composition of all body fluids is either directly or indirectly regulated by the kidneys as they form urine from blood plasma. The kidneys are also of great importance in the regulation of the pH of the body fluids.