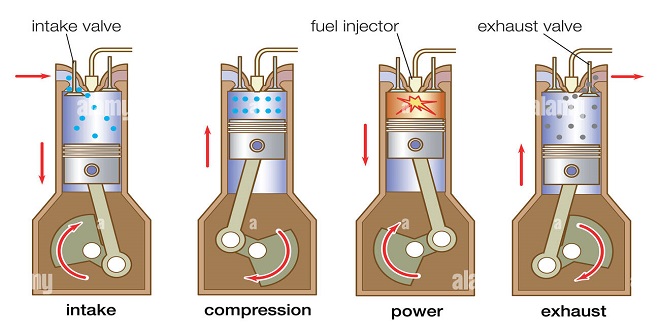 The fuel system in a diesel engine performs the same functions as it does in gas-powered engines and consists of many of the same parts. After the fuel gets to the cylinders, however, there’s a difference in the four-stroke power cycle that converts it into the power to drive the vehicle. The next section provides a closer look at that cycle.

The intake and exhaust valves are closed as the piston moves upward and places the air under extreme pressure. As the pressure increases, the air heats up to the flash point (the point at which it causes the fuel to undergo spontaneous combustion).

Just before the flash point is reached, fuel injectors spray fuel into the combustion chambers at the precise instant when the ignition is to take place.

With the intake valve and the exhaust valve closed, the fuel ignites, and combustion forces the piston down. This driving power is transmitted through the transmission and the rest of the drive train to the wheels, causing the vehicle to move.

When the exhaust from conventional diesel fuel was found to cause cancer, clean diesel engines were developed.

Although thousands of conventional diesel fuel-burning vehicles are still on the road, public pressure and environmental organizations have prodded individual states and the federal government to enact legislation and fund replacement programs to take them out of use as quickly as possible.

stricter diesel fuel standards have had a huge impact on cleaning up diesel exhaust. By 2007, the sulfur content of diesel fuels was restricted to 15 ppm (parts per million) compared to the dirty diesel previously in use that averaged something like 550 ppm.

This ULSD (ultra-low sulfur diesel) is derived by extra refining of the same high sulfur petroleum diesel oil as before, but biodiesel fuels derived from agricultural and waste products are becoming more popular in North America. I cover biodiesel fuel in the next section.

Standard diesel fuel (sometimes called diesel oil) comes in two grades: Diesel #1 (or 1-D) and Diesel #2 (or 2-D). Just as gasoline is rated by its octane, diesel fuel is rated by its cetane, which indicates how easy it is to ignite and how fast it burns. The higher the cetane number, the more volatile the fuel. Most diesel vehicles use fuel with a rating of 40 to 55.

You won’t have to worry about which type to use because all diesel automakers specify Diesel #2 for normal driving conditions. Truckers use Diesel #2 to carry heavy loads for long distances at sustained speeds because it’s less volatile than Diesel #1 and provides greater fuel economy.