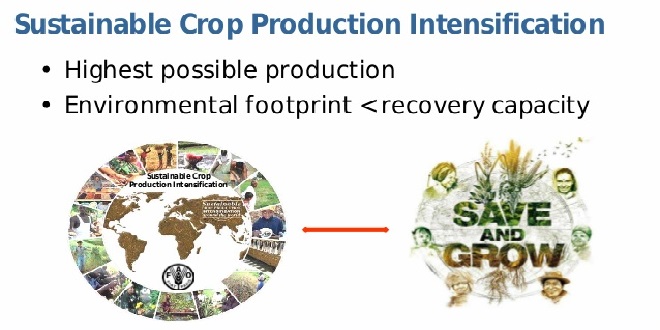 The world’s population is expected to grow to over 9 billion people by 2050; there will be a need to raise food production by some 70 percent globally and by almost 100 percent in developing countries. In many developing countries there is little or no room for expansion of arable land. Virtually no spare land is available in South Asia and the Near East/North Africa.

Where land is available, in sub-Saharan Africa and Latin America, more than 70 percent suffers from soil and terrain constraints. An estimated 80 percent of the required food production increases will thus need to come from land that is already under cultivation at a time when annual growth in crop productivity is decreasing from a rate of around 3 to 5 percent a year in the 1960s to a projected 1 percent in 2050

The green revolution of the 1960s and 1970s was a qualified success. The production model, which initially focused on the introduction of higher yielding varieties of rice, wheat and maize relied upon and promoted homogeneity: genetically uniform varieties grown with high levels of complementary inputs such as irrigation, fertilizers and pesticides. Fertilizer use tended to replace soil quality management while herbicides provided an alternative to crop rotation as a means of controlling weeds

Given the significant challenges to our food supply and the environment, sustainable intensification of agricultural production is emerging as a major priority for policy-makers and their international development partners. Sustainable intensification means producing more from the same area of land while reducing negative environmental impacts, increasing contributions to natural capital and the flow of environmental services (Godfray et al., 2010).

An ecosystem approach uses inputs such as seed, fertilizer, land, water, chemical or bio-pesticides, power and labour to complement the natural processes which support plant growth. Examples of these natural processes include: the action of soilbased organisms (that allow plants to access key nutrients; maintain a healthy soil structure which promotes water retention and the recharge of groundwater resources; and sequester carbon); pollination; natural predation for pest control. Farmers find that harnessing these natural processes can help to boost the efficiency of use of conventional inputs.

The need for a systems or integrated approach

Production is not the only element to consider when looking to meet increased demand for food. Sustainable intensification of crop production is pointless if optimizing one component (food crop production) results in inefficiencies elsewhere in a complex system also featuring livestock, fisheries, forestry and industrial components (e.g. biofuels). Similarly, throughout the food chain, post-harvest processing, transportation and distribution which do not support the supply of nutritious food to consumers will limit the benefit of efficiency gains in crop production.

Targeted to and accessible by smallholder farmers

Although the principles and practices of sustainable intensification apply to both large- and small-scale farming, smallholder farmers are key to increasing food production sustainably. Approximately 85 percent of the farmers in developing countries are smallholders and there are about 500 million of them. They cultivate less than 2 ha of land each. Their number is increasing and their farms are getting smaller.